The Buffalo Saddle Club Horse Show has been a show circuit staple for as long as most in Southern Missouri can remember and draws some of the most talented horse and rider combinations from the region. An amazing number of people can be attributed to it’s longevity and success. Jan Alford mentioned that she can trace four generations of family that have been involved in the running of the show, which currently takes place the last weekend of June annually. Buffalo has seen it’s up and downs since it’s inception in the 1940’s, but, has recently grown stronger than ever. 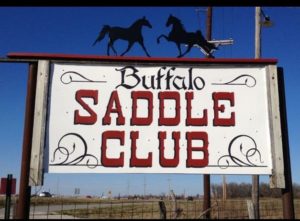 In 2013, a group began an effort to revive the event the best way they knew how; hard work. Now entering their 4th year at the helm they can be credited with hosting one of the most well-attended and talked about shows of the season. With entries averaging over 100 horses yearly, total prizes awarded in excess of $50,000 and one of the only single-night shows with a three judge lineup, it’s easy to understand the buzz. An incredible feat in a period where horse show attendance has declined. All that might sound like a great reason to attend, but if you ask Vic Rowden he’ll tell you, “if for nothing else, you should come for the cookshack.” Harter House burgers and brats, homemade pie, cobbler, lemonade and the best sweet tea in the county are always on the menu.

In addition to the annual show, the Buffalo Saddle Club hosts a popular and well-attended trivia night each Winter. The funds raised go to support the show and maintenance expenses of their grounds.

The Buffalo Horse Show takes place this Saturday, June 24th, at the Buffalo Saddle Club grounds. Showbill and judge information can be found on the Let’sGoFoxtrot Events page.