The second Region 4 Fall Festival was held recently at the Missouri State Fairgrounds in Sedalia, Missouri. Exhibitors from Missouri, Kansas and Arkansas attended the event which included Open Gaited Breed Model and Versatility Classes along with Missouri Fox Trotting Horse Performance classes. One dollar from each entry fee will be donated to Make-A-Wish Missouri.

Hosted by the Kansas City Regional Fox Trotting Horse Association and the St. Louis Fox Trotters, organizers were very pleased with the support for the show. “The enthusiasm and support from exhibitors and trainers for the show has been tremendous,” shared Amber Wilson, member of the Region 4 Fall Festival planning team. “We continue to get positive feedback on the atmosphere of the show and the quality of the facility.” 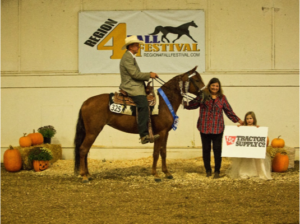 This feedback has led the planners to already announce the 2018 show date. “We encourage everyone to put September 29, 2018 on their calendars,” shared Amber. The show will again be held at the Missouri State Fairgrounds in Sedalia, Missouri.