Mid America Fox Trotting Horse Association took advantage of their 3 day Summer Grand Slam to highlight the 50 years the organization has been serving the fox trotting exhibitor. Memories of past shows could be seen in the program and heard throughout the weekend in the stands and over the loud speaker. Newer additions to the show offering, such as the colt starting clinic and pony triathlon offered attendees an outlet from the mainstay, but the focus was still on quality Missouri Fox Trotting horses showcasing the gait that made the breed famous.

The 2 Yr Old Futurity classes which have dwindled in numbers in recent years saw a good turnout of colts and gave everyone something to look forward to in the final classes of Saturday night. The show also saw large numbers of entries in the aged Amateur, Youth, Ladies and Amateur 4 yr old Maturity, which was a highlight of Saturday night. President Mitzi Nichols was pleased with the events outcome, “we’ve had a good year and look forward to using it as a platform to grow… 50 more years here we come!” 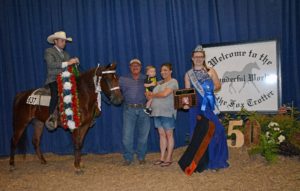 It could be argued that the biggest winner at the Grand Slam was Jimmy Bell of Rolla, MO. Jimmy owns both the 2 Yr Old Open Futurity Champion, A lil Bit of Murphy trained and shown by Josh Dampier, and the Amateur 4 Yr Old Maturity Champion, Back Alley Salley, trained by Steve Dampier and shown by Joe Dampier. Bell says he’s, “exceptionally proud of the victories” and that they “can be attributed to the hard work, honesty and tell-you-like-it-is nature of the Dampier family.” A Lil Bit of Murphy is sired by Jester’s Charming Legend and by the noted show mare, Murphy Brown. Bell purchased Murphy from Junior and Sandy Howard, staples in the fox trotting horse arena, for the sole purpose of raising a champion. Back Alley Salley, also sired by Jester’s Charming Legend was the 2015 2 Yr Old Amateur WGC with Joe Dampier and 2016 Reserve WGC with previous owner, Alice Rowden. 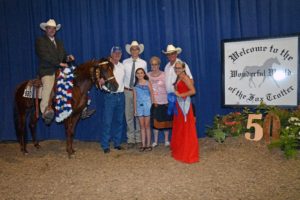 Seeing young horses show the first few times is always exciting. And, this year’s 2 Yr Old Amateur division didn’t disappoint. The largest number of entries in several years and talented horse and rider combinations made the class a fan favorite. Brad Matlock and King’s Basil R took home the roses in the Amateur Division. Basil is owned by Matlock’s son Garrett and Larry Robbins, who bred and raised the Jester’s Charming King stud colt. Robbins says “We almost didn’t show him. King colts are notoriously slow to mature. Two weeks out I thought we were saving him for the ’18 3 Yr Old Futurity and then Brad calls me up to say that he’s ready. Amazing how that can happen overnight.” The colt is named for Larry’s granddad, Basil Ledford.

Mid America championship class highlight videos and additional show information can be found on our Facebook page. Youth class and Reserve Champions are included below. Stay tuned to LetsGoFoxtrot.com and be sure to follow our social channels for weekly show and trail updates. 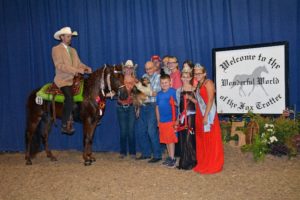 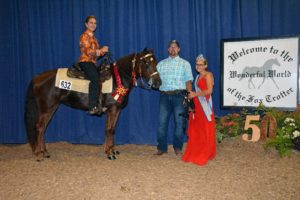 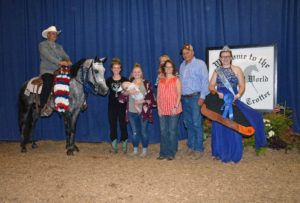 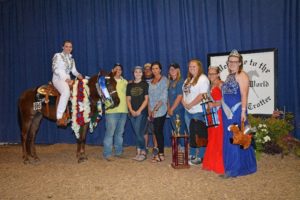 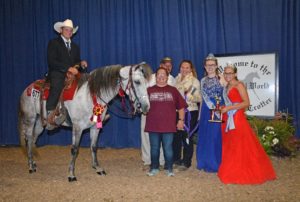 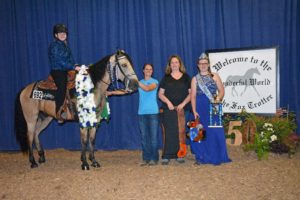 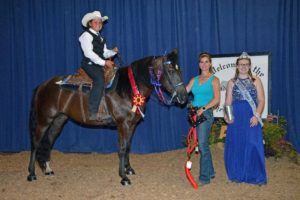 Midnight Mandy, Youth 11 and Under Reserve, owned and shown by Kolbey Ballowe